Carve out time to learn about pumpkins

We’ve been highlighting books on spiders and skeletons, so this post will continue the autumn theme by highlighting a few books about pumpkins. After all, what's a Halloween display without a glowing pumpkin to greet trick-or-treaters? Sure, there's sticky goo that has to be scooped out before etching triangle eyes and a toothy grin, but it beats trying to find an extension cord to plug in a synthetic jack-o-lantern.

Gail Gibbons provides a classic book for this topic with The pumpkin book. Recognized by the International Reading Association as one of its Teachers' Choices for 2000, this book continues to be a great resource for both scientific and cultural information about pumpkins. The life cycle of the pumpkin is depicted through text as well as cartoon-style (but labeled) drawings. Connections with Halloween and Thanksgiving are included in the narrative, including a drawing of that quintessential carved pumpkin. The final page has short excerpts about historical, scientific, and cultural aspects of pumpkins, as well as directions for drying pumpkin seeds. 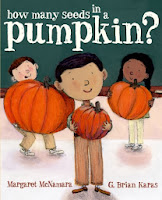 Speaking of seeds, a good read-aloud story about pumpkin seeds is Margaret McNamara’s How many seeds in a pumpkin? This 2007 fictional book, also recognized as a Teachers' Choices selection, tells the story of students in a first grade classroom who are predicting the number of seeds in small, medium, and large pumpkins. The students scoop out the seeds and count them by grouping in twos, fives, and tens, which makes this book a resource for easily integrating math with science. After all the seeds have been counted, the teacher explains some clues that his students can use for predicting the number of seeds, such as the color, species, and number of lines, indicating that it’s not just the size  of the pumpkin alone. Spoiler alert: The smallest pumpkin winds up having the most seeds. “Charlie’s Pumpkin Facts” at the end includes some facts about pumpkins, such as the time needed to progress from seed to fruit. 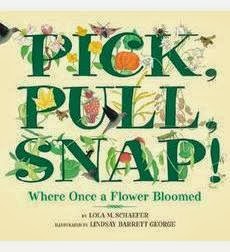 Finally, Pick, pull, snap! Where once a flower bloomed by Lola M. Shaeffer (2003) is a lift-a-flap book that overtly makes the connection between flowers and fruit. The writing style of this book is vivid and succinct, resulting in its recognition by the National Council of Teachers of English as a Notable Children's Book in the Language Arts. Each page spread has three to five richly descriptive sentences about one type of flower (“On a sandy hill, yellow blossoms open on knee-high plants, spilling soft pollen between petals”). The subsequent fruit is shown under the flap, like a mystery unveiled, and the text for each identified fruit ends with “… where a flower once bloomed.” Up-close paintings accurately portray the seeds and flowers, and children are depicted picking each resulting fruit: pea pods, raspberries, corn, peaches, peanuts, and pumpkins. The end pages include additional information about each fruit shown in the book as well as factual information about plant pollination and fertilization. A glossary includes words that are in the text of the book, such as “pollen,” and words that are in the end pages about plant fertilization, such as “anther” and “stamen.”

These are just some of the resources available for finding out about the life cycle of the pumpkin. Knowing about their life cycles may help you appreciate those slimy seeds and strings when you are carving! I'll have one carved with triangle eyes, but if you are the Martha Stewart type and want something more creative, you can check out her templates here.
Posted by Unknown at 10:29 AM